NQM traveled down to Atlanta at A3C and they caught up with Torae at the New Era “Meet & Greet”. They chopped it up about Tor’s latest EP, “Off The Record,” his favorite track “Journey Pt II and more. Torae also talks about wanting to work with Just Blaze, Erick Sermon as well as Marsha Ambrosius and Chaka Chan. Lastly, Torae talks about his next project and “dream project”. Shouts to Junie & Ace. 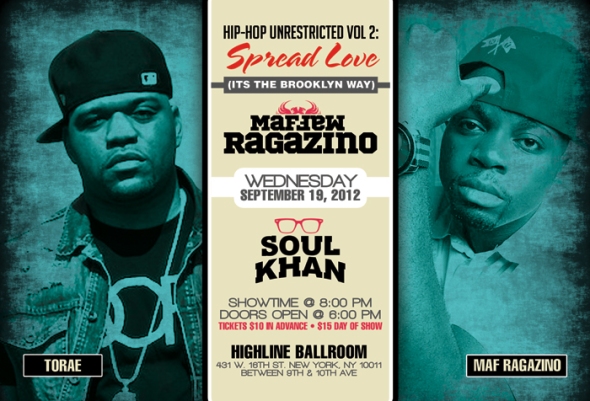 On September 19th Team Torae invades The Highline Ballroom in New York City along with Maffew Ragazino & Soul Khan (of The Brown Bag Allstars). Here’s your chance to see Torae do a full set of music & run through whatever he chooses from his catalog of 5 full length releases & features. We also got word he’ll be bringing some friends along too. The Highline Ballroon is located at 431 w. 16th street (btwn 9th & 10th Ave) doors open at 6pm showtime at 8pm. Tickets are $10 in advance & can be purchased HERE $15 at the door. For further in check out Highlineballroom.com

Here’s some footage shot by Zoi of Bad-Perm.com of Torae performing “That Raw” & “For The Record” during the Serious As Cancer event in NYC. Enjoy & make sure you come out to The Highline Ballroom on Sept 19th to catch some of this live.

Off The Record docuseries Episode 5 “Thank You”

In the final episode of rapper Torae’s “Off The Record” docu-series, his debut album is finally complete and Torae is back on the road to the A3C Festival in Atlanta, GA to rock the stage and do a live listening session for his album, For The Record. A who’s who is in attendance and the reception from the press, supporters and colleagues is fully supportive.

Back in BK, Tor goes on a media blitz hitting DJ Tony Touch’s Toca Tuesdays, Live From HeadQcourterz w/ DJ Premier, and The Halftime Show with DJ Eclipse. After that is his Boston show and instore at UGHH, and his Brooklyn instore at the Fat Beats pop-up store.

Tor then heads to Europe where he finishes out the year and asks the question…is it all worth it? The finale episode of Off The Record, will definitely answer that question and more. Guest appearances include DJ Eclipse, DJ Tony Touch, DJ Premier, Sha Stimuli, Masta Ace & more.

Off The Record docuseries Episode 4 “Only Way”

﻿Now in the final stretch – and with a deadline to meet – Torae hits the road to Norfolk, VA to work with producer Nottz. After interviewing with DJ Bee of 103 Jamz and finishing the track “Thank You”, he drives to Bright Lady Studios in North Carolina to record with 9th Wonder, Khrysis, E. Jones, Fatin and the rest of The Soul Council. Upon his return to NYC, he heads back to the studio to finish the title single “For The Record” with DJ Premier and to get the album mixed and mastered. With all the travel and marathon studio sessions, will he get the hit song he’s looking for? Will the album be completed in time? For The Record is due soon, and with no more money, and even less time, Torae is in the race to the finish line.

Off The Record docuseries Episode 3 “You Ready”

So now it’s time to make the album. The creative piece is key, but there’s also a business aspect that can sometimes go ignored. In episode 3, Torae meets with his business and creative consultants to answer the following questions: How do we build buzz? What producers will take us to the next level? What deal should we go with for distribution? Finally; we follow him into the studio as he records with Large Professor and we finally see how “Norbert” came to be. 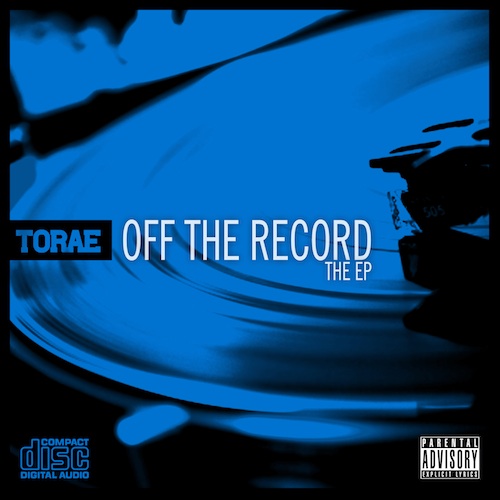 DJ Eclipse set off Rap Is Outta Control on Sunday with this joint off Tor’s new EP slated for an August 28th release. It’s the 2nd installment of The Journey he started on Daily Conversation. The Journey Pt. II produced by Marco Polo.

Off The Record docuseries Episode 2 “What It Sound Like”

Episode 2 traces Torae’s journey as an MC, starting as a young kid with a maxed out credit card on a self- pressed vinyl single, which lead to his work with The Coalescence and breakout singles “Click” and “Get It Done” with Skyzoo and DJ Premier. Reeling from the support and new fan base he established, he then signed to Duck Down Records where he released the critically acclaimed joint effort “Double Barrel” with producer Marco Polo. The stage is now set for what is next to come: the recording of his debut solo album. With bills to pay and a family to feed, Tor knows he can’t live on props alone; with this album it’s make or break.

Off The Record docuseries Episode 1 “Alive”

In the first episode of Torae’s docu-series “Off The Record”, Torae, his mother and childhood friends, discuss his life growing up in the Coney Island area of Brooklyn, personal challenges he encountered as a kid, his introduction to Hip-Hop and his first live show. The Urban Daily will debut an episode every Wednesday in August. You can view Episode 1 HERE.

iHipHop.com caught up with Coney Island’s own Torae at the Rock Steady Crew’s 35th Anniversary show in Lincoln Park, NJ to discuss a variety of topics. In this exclusive interview Torae talks about the generation gap in New York Hip-Hop, getting respect from the older generation of MCs, his upcoming EP “Off The Record,” whether he prefers 9th Wonder or Khrysis on the boards, and who he’d like to collaborate with.

Torae – Off The Record: The EP

“I worked very hard on For The Record and recorded a lot of tracks with different producers. Some songs didn’t make the album, not because they were wack, but because I didn’t want to over saturate the project & storyline. Off The Record is something for true Torae fans. Songs that deserve to be heard. Think of it as The For The Record, Lost Tapes.” says Torae.

Off The Record will be released digitally via iTunes and other online retailers on Tuesday, August 28 2012.