All my grown folks might remember Bob Slade’s week in review on Kiss FM. Here’s one from 1989 with Slick Rick The Ruler. He was on the air wildin’. Back to the drawing board, ya wimps! Hahaha classic ish.

This is that NY filth I’m looking for from the Mobb. I love this more!

The Sit Down With Dee Vazquez: Blog Rappers Vs. Street Rappers (Pt.2) (Video)

Here’s the 2nd half of THIS. Shouts to Amber Ravenel…

Where I’m From x Clifford Smith from Gasface on Vimeo.

Absolutely dig these vignettes to the fullest. It would take someone from France to come up with some authentic hip-hop shit though smh. Meth is one of my idols along with LL & Ice Cube just so yall know. I had the pleasure of filming one of these clips as well, peep it after the jump also hit up nyminute.arte.tv for more clips. Shouts to Matheieu Rochet.

END_OF_DOCUMENT_TOKEN_TO_BE_REPLACED

The Sit Down With Dee Vazquez: Blog Rappers Vs. Street Rappers (Pt.1) (Video)

I had a chance to sit with the amazing Dee Vazquez & a few homies to compare/contrast the “Blog Rapper” v. “The Street Rapper” a lot of interesting point were made here. Check out part 1. Shouts to Amber Ravenel on the link…

Saigon on Rap Is Outta Control

Here’s a bit of footage from when we had Saigon on RIOC. Make sure yall support that “Greatest Story..” album on the 15th. AFTER you buy “Heart Failure” of course

I can remember seeing the BTS for this vid like a year ago. Like before Wayne went & green screened everything pre-prison. Anywho it’s out now, Santana’s “Reagan Era” out soon.

Saigon came through “RIOC” this past Sunday to talk about the long awaited release of “The Greatest Story Never Told” which comes out on the 15th. To hear that interview as well as a lot of new music hit the jump.
END_OF_DOCUMENT_TOKEN_TO_BE_REPLACED

Weezy Was A Rolling Stone

Dwayne Michael Carter graces the cover of the latest Rolling Stone magazine to talk about his bid in prison & his bid to get that #1 spot back, every post release verse I’ve heard from him has been stoopid. Carter IV coming soon!! Full interview here, spotted at the (2)dopehouse.

And for sh*ts & giggles…

This mugshot was funny as hell tho’ 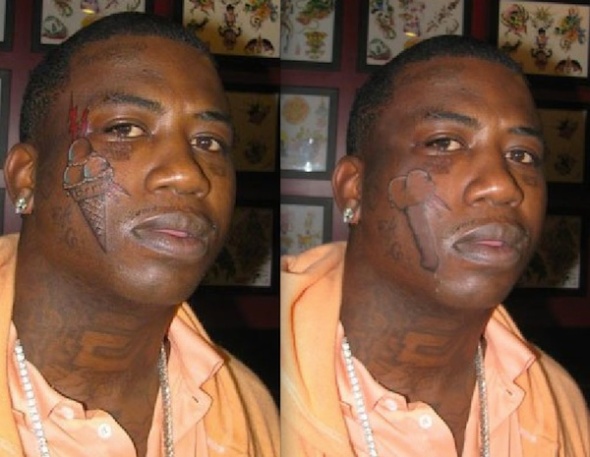 It’s not too often you’ll see a Gucci Mane post up here, but if you see it click it, cause I’m clownin’. I wish I could take credit for this photoshop phenom but I can’t. Maybe we were just on the same brain wave. Either way, salute that man!!

Initially I was posting this clip for Lil’ Kim’s ole Nicki Minaj hatin’ ass, but as I sat through the torture of waiting for her to take the stage I noticed something more disturbing then her new, new nose. Why in the f*ck are there 4 guys in army fatigue dancing to “Freak Gurl”?? Not that I’m saying have some half nekkid ladies on stage either I mean that’s what Kim is for but why have these horribly choreographed Q dog rejects up there. Wait, wait…do these niggas have on capris with fringes on the bottom?? iQuit!! Freaky indeed.

Did yall cop the Cop??

This @RickyRozay album has been all the rave on these interwebs & skreets. I’d like to know what you all think. Is it more hype then heat or vice versa. Lemme know something. I won’t weigh in just yet, but I will say “the new Biggie” NOT….

Anyways “Teflon Don” is out there now for your purchasing pleasure. As always if you feeling the music make sure you support it. Bawwwwse!!!

Styles P The Ghost at SOB’s

It just may be. I mean Weezy has used his share of film references in verses during the years. The most recent coming in the form of his single “I’m Single” (see what I did there). This time Wayne references one of my favorite movies ever New Jack City. It seems those Cash Money folks are fond of that movie too the name of their label is Cash Money for Christ sake. Their crew was called CMB just like the crew in New Jack. Wayne has named his album Tha Carter 3 different times and yes I know that his last name is Carter but Tha Carter was also the name of the building Nino & his Cash Money brothers took over in New Jack, coincidence I think not. Wayne even filmed his video for “Hustler Musik” uptown in Harlem where NJC was set. I think it’s safe to say the homie is a fan. What got me to make this particular post was all the yout dem totally unfamiliar with the songs origin. I asked a group of teeny boppers if they liked Weezy to which they ALL emphatically shouted YES!!! I then asked if they were familiar with the song “I’m Single” they absolutely knew the song & even serenaded me with the explicit version of the songs chorus. Then I asked about the line “had to cancel that bitch like Nino” & none of ’em could provide me with a correct answer. I heard things like “cancel that bitch like we know”, I heard Wayne had an artist on Young Money named Nino that got dropped (I can’t be mad at that kind of in depth reasoning though). I heard all types of shit. I explained to them what the line meant & where it came from and honestly they could really care less. They were like “oh I know that movie…my pops has the DVD”, hahaha. Damn kids!!! It was an enlightening experience to say the least. It’s also an experience I choose not to have again. I can’t stand these know it all, skinny jean, mohawk, reading glasses wearing teenage bastards and wish to have as little contact with them as possible. I believe the children are our future…I also believe our future is fucked!!!! Hahaha nah not really….but really.