@Torae hosts the Brooklyn Hip-Hop Festival for the second year in a row and got BET Digital to provide a glimpse behind the scenes. Features headliner Q-Tip along with Kanye West & Busta Rhymes and interviews with Rah Digga, Nitty Scott, MC, Homeboy Sandman & more.

I didn’t get to see this live as I had to head to Sirius during the halftime show I gotta admit it wasn’t that bad. We all know Rihanna isn’t the best singer or dancer but she manages to rock this performance. She really gets sexier & sexier with each new project & make-over. Applaud her stylist for taking her career to the next level & Terius for giving her a smash hit!. During the “What’s My Name” performance the flirtation between her & Aubrey is blatantly obvious, leading me to believe he tagged at least once. Thank the Lawd for hip-hop my Canadian friend. Kanye’s outfit was uhhhh…..Kanye’s outfit. Nothing that guy wears shocks me anymore, but I am a little curious about the actual material his pants were made from?? *Blank Stare* Overall that was a dope halftime show waaaaaay better than the Superbowl’s. And I gotta say I’m very happy about how urban music was represented during the weekend in general. Cali Swag District, Keri Hilson, Melanie Fiona and more. Hats off to David Stern for green lighting those performers & giving them an opportunity to shine on such a grand stage.

Kanye West ft. Everyone on Earth – All Of The Lights (Video)

So as yall may or may not know I’m a huge Kanye West music fan & even though MBDTF is my least fav of all his LP’s it has some heat on it. I’m not crazy about this joint but between Ye’s Jordan 3’s, Cudi’s red leather & Rihanna’s EVERYTHING it HAS to be posted! Enjoy “All of the Lights”… 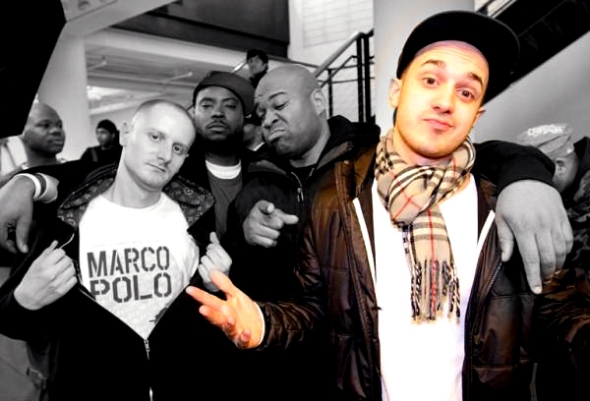 Yall know I rocks with the homie Rojas’ pen game. that boy can RAP!!

Oh and yes, I will post pics with me & the featured artist if I have ’em. Live with it! It’s my damn blog, hahaha…